#PAAF2019, the film workshop "How to achieve co-productions in film" was held 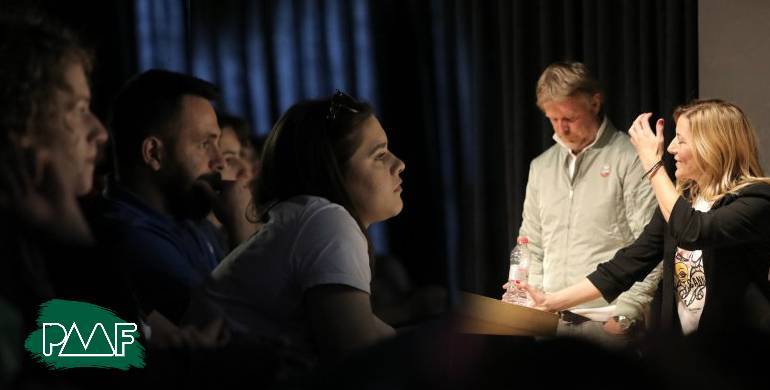 In the course of the activities organized within the festival "Prishtina Arts and Architecture Festival", the workshop "How to achieve the co-productions in the film" was held today where Tea Korolija and Igor Stoimenoff, Croatian producers, lectured.

During this workshop, all the stages of the film production were discussed, starting with the writing of the script, the role of the producer in a film, realization of the film, and many other important points that the students of the Faculty of Arts listened to attentively.

Tea Korolija, shared some of the experience she gained during the realization of the film "BESA", which includes a large cast of Albanian actors. She also said a producer should follow every step of the script to make a well-rounded film.

"During the making of this movie, we've learned that producers have to be focused and follow every step of the script that was written. This makes you focused and more responsible, "she said.

Meanwhile, the other producer of "BESA", Igor Stoimenoff, talked about the realization of the film in the beatiful landscapes of Kosovo which amazed him. He also said that religious tolerance and diversity in Kosovo is unlike anywhere else, which impressed him greatly.

At the end of the workshop, producers Korolija and Stoimenoff thanked the Albanian actors who were part of their film, adding that Kosovo has young people with unquestionable potential.